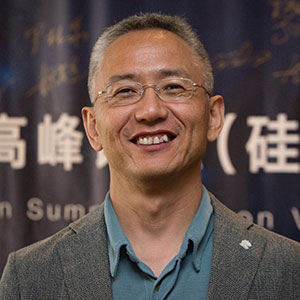 Dr. Robert Zhang, is Co-Founder and President of CloudMinds Technology, where he is responsible for the company’s global business and product strategies, operations, and strategic partnerships. Before co-founding CloudMinds, Robert has been working for Samsung, Irdeto, Joint Innovation Lab, Microsoft, and Apple from 2001 to 2015. He was the Head of Service Strategy and Operations for Samsung Telecommunications America. Previously, he was VP of Product Management at Irdeto. From 2009-11, he served as VP of Product Development at the Joint Innovation Lab. Prior to these senior executive roles, he was a Senior Program Manager at Microsoft and as IPod Operations Program Manager and as Senior Engineering Scientist at Apple. Robert earned a Ph.D. and M.S. in Computational Mechanics and M.S. in Electrical Engineering and Computer Science from the University of Illinois, an M.S. in Management Science and Engineering from Stanford University, and a B.S. from Tongji University, China.