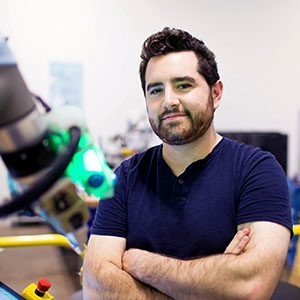 Kel Guerin has been working in the robotics and automation space for more than 10 years, focusing on the design and usability of wide variety of robots, including systems for space exploration, deep mining, surgery and industrial manufacturing. While obtaining his PhD from Johns Hopkins University, Kel worked specifically on the challenge of making industrial robots more flexible and easy to use. The result was his award winning FORGE operating system and plug-and-play interface for industrial robots. Kel then spun out his technology into READY Robotics, an industrial robotics start-up he co-founded in 2016. His work has been featured in the Wall Street Journal, and READY's flagship robotic platform, the TaskMate, was called "the Swiss Army knife of robots" by Inc. magazine. With READY, Kel is laying the foundation for a more democratized automation landscape, where developers and end-users are empowered by a universal software and hardware architecture to rapidly create easily turnkey automation solutions that can be deployed in days instead of weeks or months.