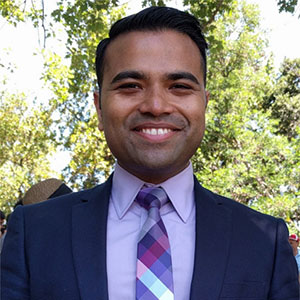 Samir Menon is a founder and CEO of Dexterity, Inc., a company focused on developing autonomous robots with human-like dexterity for applications in logistics, supply chain, and warehousing. Samir holds a Ph.D. in Computer Science from Stanford University, where he developed simulation models and control theory formulations to study the human musculoskeletal system. He is experienced in robot control, dynamics, modeling, simulation, and building robots and haptic interfaces. Samir has authored numerous research papers on robotics, haptics, human biomechanics, and spiking neural networks. He co-chaired IEEE SIMPAR 2016, and organized workshops at IEEE Humanoids 2015, and IEEE ICRA 2015. While at Stanford, he was awarded two Stanford School of Engineering fellowships and one Stanford Interdisciplinary Graduate Fellowship. Prior to that, Samir completed his Bachelors in Technology at the Indian Institute of Information Technology, Allahabad, where he was awarded the university's merit scholarship.