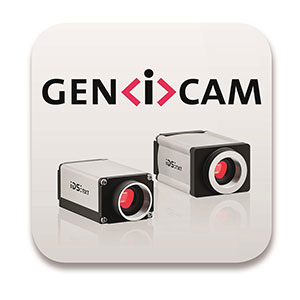 When users want to execute self-created functions on intelligent cameras, they face two challenges: on the one hand, they often only have access via proprietary interfaces, which makes it more difficult to process data in third-party applications; on the other hand, only few models offer a high-speed data interface such as GigE Vision. However, industrial applications often require both. IDS Imaging Development Systems GmbH therefore combines standard vision industrial cameras with the vision app-based IDS NXT concept. Thanks to a "Smart GenICam App", data generated by customer-specific programming can be used in exactly the same way as if they were part of the manufacturer-independent standard functional scope of the industrial camera.

GenICam as a camera interface provides standardized camera functions as well as the so called Feature Node Map (camera API) which allows camera manufacturers to integrate special functions. IDS is currently developing a "Smart GenICam" vision app, with which customers can also integrate and use camera features they have created themselves in a vision-compliant manner. The function is available from Q2/2019.

Users simply upload the new camera function to their IDS NXT camera as a vision app. The camera firmware then integrates the application code into the range of functions. Configuration, control and results of the vision app can easily be processed via the camera's XML description file in any GenICam-compliant third-party application, such as HALCON, using the full GigE bandwidth at the same time.

The use of vision-compliant applications on the IDS NXT platform offers a further benefit, because application processes can be scaled between camera and host PC. As powerful embedded systems, models such as IDS NXT rio and rome offer the option of partially or completely shifting decision processes from the host PC to the camera ("on the edge"). Advantages include lower network load, hardware-accelerated processing, lower energy consumption and lower system costs.

About IDS
IDS Inc. was founded in 2007 as a subsidiary of IDS Imaging Development Systems GmbH. The industrial camera manufacturer IDS Imaging Development Systems GmbH develops high-performance, easy-to-use USB, GigE and 3D cameras with a wide spectrum of sensors and variants. The almost unlimited range of applications covers multiple non-industrial and industrial sectors in the field of equipment, plant and mechanical engineering. In addition to the successful CMOS cameras, the company expands its portfolio with vision app-based sensors and cameras. The novel image processing platform IDS NXT is freely programmable and extremely versatile.

Since its foundation in 1997 as a two-man company, IDS has developed into an independent, ISO-certified family business with more than 250 employees. The headquarters in Obersulm, Germany, is both a development and production site. With branches in the USA, Japan, South Korea and UK as well as other offices, IDS is represented internationally.

Back to Exhibitor News
Produced by: