Double-speed SCARA hits the US market 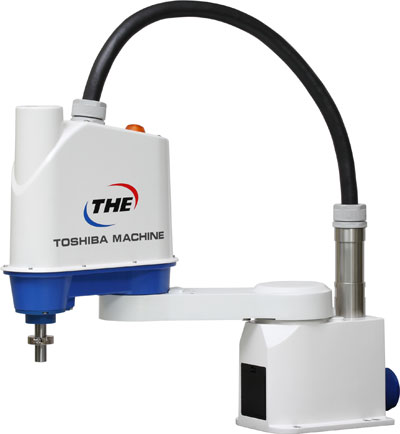 The THE600 is the latest addition to Toshiba Machine’s range and builds upon the established specifications of the THE400. Toshiba Machine’s THE400, which was launched last year, promises to boost manufacturers productivity without extortionate investments. Boasting twice the speed and 60 per cent higher payload capacity than competing SCARA models in the same price range, both THE models provide ideal investments for those new to automation.

“Combining high speed operation with a high payload capacity, the THE600 model has been developed to meet growing demand for fast-cycle automation,” explained Nigel Smith, president of TM Robotics. “Manufacturers are looking for machines to deliver improved precision and enhanced performance without breaking the bank, particularly in parts assembly, testing and transfer processes.

“As one of the first industrial robot manufacturers to bring SCARA models to the market, Toshiba Machine has a wealth of experience in developing this technology. This knowledge and engineering allows TM Robotics to provide cutting-edge robots to our customers at a fair and attainable price.”

TM Robotics will be exhibiting alongside distribution partner, ASG Jergens. ASG is an RIA certified Integrator, focusing on the assembly industry. Having established a partnership with TM Robotics in 2017, ASG has since integrated ASG screw feeding systems with Toshiba Machine robots for its customers. At Automate 2019, ASG will demonstrate exactly how Toshiba Machine’s SCARA and Cartesian robots can be used to automate screwing and feeding applications.

TM Robotics will also exhibit other robots from its extensive selection, including the TVM range of six-axis robot models. The TVM range is a vertically articulated series available in three different sizes, lending itself to a multitude of industries.

With the largest range of SCARA models on the robot marketplace, TM Robotics will also demonstrate several SCARA machines, including the well-established TH-A range and the high speed, high performance THP models.

Alongside demonstrations of robots, TM Robotics will also be exhibiting its latest robot control software, TSAssist. The robot programming tool offers powerful assistance to all phases of automation. The software, which is compatible with any Toshiba Machine SCARA, Cartesian or six-axis robot, will be demonstrated by the team at booth number 6763.

“Our software isn't about making programming complicated, it’s impressively user friendly,” explained Ryan Guthrie, executive vice president of TM Robotics. “In fact, the results of TM Robotics’ Global Robotics Report showed that simple programming was, above all, the most important thing customers look for in control technology when choosing a robot.

“TSAssist has been developed with this level of usability in mind, particularly for its 3D simulation features. At Automate 2019, TM Robotics’ team will be available to provide demonstrations of the software, illustrating how the tool can be used to save manufacturers valuable programming time.”

TM Robotics will demonstrate its technology from booth 6763 at Automate 2019. To schedule a meeting with a Toshiba Machine expert at the show, please contact the team in advance.

More information on TM Robotics’ existing product ranges can be found on the TM Robotics website.

About TM Robotics
TM Robotics has installed thousands of robots in factories throughout the world, including North and South America, India, Russia, Europe, the Middle East, Africa and Australia. Many of the top manufacturing companies depend on TM Robotics’ product offerings for their reliability, performance, and overall value. In partnership with Toshiba Machine, TM Robotics is the only company that offers a comprehensive range of all three categories of robots; 6-axis, SCARA, and Cartesian. These are designed and built in-house. TM Robotics delivers cutting-edge solutions, training, and support services for industrial and commercial applications.

Back to Exhibitor News
Produced by: